Race, Crime, and Justice in America

New Century Foundation is a 501(c)(3) organization founded in 1994 to study immigration and race relations so as to better understand the consequences of America’s increasing diversity. It sponsors publications and books, and holds occasional conferences.

Perhaps the most important publication of New Century Foundation is The Color of Crime, New Century Foundation’s report on differences in crime rates by race, bias in the justice system, and interracial crime. First published as a monograph in 1999 with a second edition in 2005, the 2016 revised edition of The Color of Crime is now available on-line as a free PDF download.

Watch Jared Taylor’s June 2,1999, announcement on C-SPAN of the publication of The Color of Crime (video).

New Century Foundation also published American Renaissance, a monthly magazine that dealt with race and racial issues here and abroad. The contents of back issues of American Renaissance — along with key news items and other revelant materials — are available on-line here.

Click here to see DOJ Statistics on Race and Violent Crime for 2015. 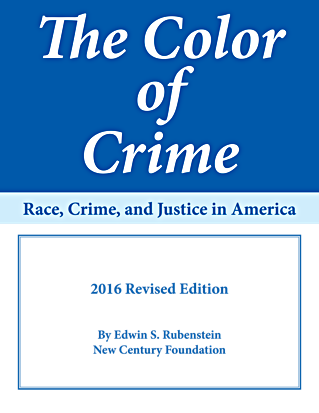